As we enter the holiday season, it’s also the time of year for holiday parties. You may want to take extra caution if you’re trying to rush home before or after one of these fun-filled events, especially if you are traveling on Bradley Boulevard.

Three new speed cameras have been installed on Bradley Boulevard between Huntington Parkway and Goldsboro Road. In case you haven’t noticed them yet, I’ve listed them for you so you can slow down to the lovely 30 MPH speed posted on this stretch. You will notice that the speed limit signs have new “photo enforced” signs attached to the speed limit sign.

If you are heading toward downtown Bethesda on Bradley there is a speed camera to your right just after you pass Huntington Parkway on your left. It is set up to catch eastbound speeders. Be careful because I know that traffic backs up there and when you finally break free and the light turns green you want to move quickly around the bend. 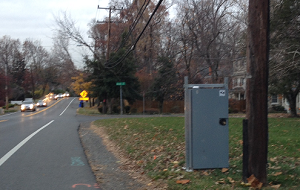 If you are leaving downtown Bethesda on Bradley heading west, there are two new speed traps set up to catch westbound speeders. They are located on the stretch of road between Goldsboro and Wilson.

The first speed camera is just before Devon Road, right after Cornish Road on your right and Beam Court on your left. It is out in the open and easy to see, but it looks similar to the numerous utility boxes along this stretch of road so you may not notice it until it’s too late. 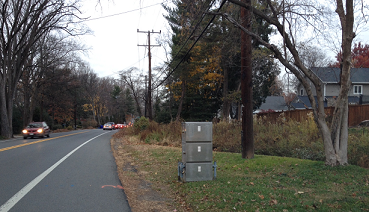 The second is a bit further down on near Oldchester Road. This one looks like three silver boxes stacked on top of each other. But be warned that it is a speed camera as well.

I hope that this information about the new speed cameras helps you avoid getting a speeding ticket when driving on one of Bethesda’s pretty, wooded roads. And I hope you have a safe holiday season!

If you or someone you know is thinking about buying a home in Bethesda, Maryland, give me a call to get started.

2 thoughts on “Watch Your Speed On Bradley Boulevard”