How long have you known me? Have you heard of Dana’s Democratic Rule? Have you ever tried a Dana Shooter? Do you remember the item pictured above? It’s the box I used to carry my cassette tapes to and from my bar tending job at Mr. Eagan’s.

It’s been a very long time since I spent my Sunday evenings tending bar at the Dupont Circle institution and neighborhood dive bar known as Mr. Eagan’s. In fact, it was on a St. Patrick’s Day many years ago that Jimmy Eagan closed his Irish Pub and left town. Cafe Citron now stands where Mr. Eagan’s stood for 32 years ending with Mr. Eagan’s Last Call at 1:30am, March 18, 1999. That was also the day I retired from bar tending.

It would be difficult to describe my ten years of working at Mr. Eagan’s. I’ll simply say that I learned a lot about people, life, DC, drinking, old men, the Washington Redskins, jazz, community, rats, darts, and what it really means to be a regular. The lessons I learned as a bartender stuck with me and serve me well today as a woman, parent, coach and real estate agent.

I haven’t thought about my time at Eagan’s in quite a while. But during a little spring cleaning I found this box full of tapes (and memories) and decided to start playing some of these oldies, but goodies for my daughters. Will they ever hear this music if I 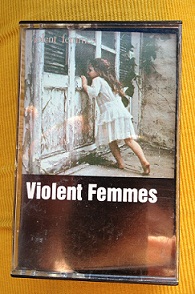 don’t expose them to it? Probably not. Luckily, my car has a cassette player in the dash so I can play what I want when I’m driving and my girls are basically held hostage to this music while seat belted in the back seat.

Today I started with a classic. The Violent Femmes self titled album from 1983. This is truly a remarkably fun and simple album. I remember my father letting us play this in our family car and actually liking it. He, like my sister and I, thought their later albums were too commercial sounding and less appealing than this debut album that launched so many hit singles. Many of which are still played today.

I played this on the way to school today and I’d say my daughters were not impressed. But, being a cassette tape, they only heard side B. Tomorrow I’ll torture them with side A. Keep your eyes open for future posts where I reveal the next cassette tapes I choose to play for my daughters.

In the meantime, have a fun and safe St. Patty’s Day!