You may recall a recent post of mine about another local Chinese Restaurant after the closing of long time local favorite, Jade Billows. But now there is a new restaurant in the old Jade Billows location and locals are buzzing about whether or not this newcomer will fill the void that was left behind. This new restaurant is called China Jade Bistro. 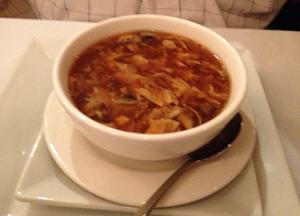 dinner together and see what we thought of the food and service. There are staple dishes that we each use to test out a new Chinese restaurant and my daughters took this meal very seriously. Lucky for China Jade Bistro, they had all of our favorite dishes on the menu.

My husband wanted to test the hot and sour soup as part of his evaluation. He and my older daughter devoured it so I guess it was good. My younger daughter was initially disappointed to read that they offered chicken instead of pork dumplings, but was pleased

once they arrived and she had a chance to try them. They were eaten so quickly that I didn’t have a chance to take a picture. You will see the one remaining dumpling in the picture below.

My husband and I feel there is one dish that tells us if a restaurant is going to have enough heat to hold our attention and that dish is Szechuan Chicken. Sometimes it has a strong plum sauce taste and other times it is just fire. We were pleasantly surprised by China Jade Bistro’s rich and flavorful version. Their default heat level had a nice warming sensation.

Our daughters’ earliest memories of Chinese take-out include Chicken with Cashews and it remains an important part of many of our summer meals at the Seven Locks Pool. My daughters were delighted

with China Jade Bistro’s version of Cashew Chicken. It did not have the same fried texture, but had teh same sweet flavor that originally attracted them to the dish. They also enjoyed the Orange Beef, which my husband and I thought was very fresh and tender and probably the best we’ve had in a long time.

In the end, we all decided that the new decor was not the only change at China Jade Bistro. The food was better. The service was at the same level we expected, but the food seemed fresher, lighter, and more flavorful. And, they are open on Monday’s unlike it’s predecessor.

If you would like to give China Jade Bistro a try, it is located at 7945 Tuckerman Lane in the Cabin John Shopping Center in Potomac, MD. Their number for take-out is 301-299-9797.