One of the best things about working in downtown Bethesda is the wide range of lunch options that are available without getting in your car. I’ve 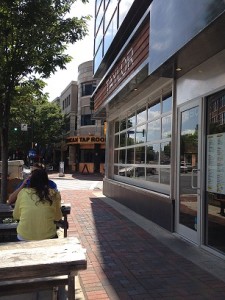 tried a lot of different places, but there is always something new available. I will try to start bringing you reviews of some of the places I frequent for lunch. I’ll start it off with Taylor Gourmet Deli.

When Taylor Gourmet Deli first opened in Bethesda, I was very interested in giving it a try. It had an industrial look with open-air walls and buckets hanging from the ceiling. Unfortunately, I wasn’t alone and every time I went there, the line was too long for me to grab something quick and go back to the office. I eventually tried it out and the first thing I noticed was that the bread used for the sandwiches was great. Once in awhile I would go over and grab a cold sandwich and they were good, but I wasn’t raving about Taylor to anyone.

With all the choices available, it is extremely rare that I would eat lunch at the same place two days in a row. In fact, I don’t think it’s ever happened. But earlier this week I was really hungry and I wanted something 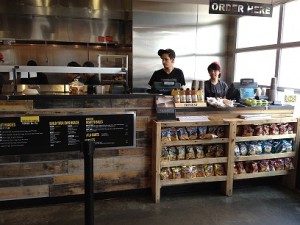 different and I went to Taylor and tried the Pattison Avenue. It is one of their hot sandwiches. It’s made with hot roasted pork, broccoli rabe and sharp provolone. I ordered the 12″ sandwich on their regular bread and took it to go. It was wonderful. I must admit I ate the first 6″ half quickly and probably would have stopped at 7 or 8 inches, but the hot broccoli rabe was really good and made me feel like I was eating my vegetables so I ate it all.

The next day it was beautiful out in Bethesda and I found myself heading back to Taylor for another hot sandwich. This time I tried their Delaware Avenue which is one of their hot chicken cutlet sandwiches. This one includes roasted red peppers, red onion and gorgonzola. I took my 6″ Delaware Avenue to go and sat at the picnic tables outside. It was also delicious. That great bread and the warm cheese. Yum!

So, what I didn’t know when I initially visited Taylor was that it’s the hot sandwiches that are the most amazing. But as a Jersey girl, I know it all starts with the bread.

If you would like to visit Taylor Gourmet Deli in Bethesda, the address is 7280 Woodmont Avenue, Bethesda, MD and they just a short walk from the Bethesda Metro.

If you, or someone you know is thinking about buying or selling a home in the DC Metropolitan Area, give me a call to Get Started.