For weeks my friend, Jessie, has been raving about a few different restaurants that I have not tried before. She

knows I blog about food and she convinced me to meet her at Sugo Cicchetti for lunch and promised to let me photograph and taste her food. She brought another friend as well so we could sample more dishes.

Our server was wonderful. It was instantly clear to me that my friends had been there often enough to become regulars. He greeted them by name and seemed to know what they liked to eat. He told us the specials that Executive Chef, Dimitri Moshovitis, had prepared for the day and we ordered two appetizers to split. The beet salad and the soup of the day – gazpacho with watermelon.

These two dishes were superb. The beet salad is something that I would definitely order again. The beets were amazing and it was perfectly balanced. However, the gazpacho was even more remarkable. When it arrived I wasn’t too sure about the benefit of dropping a few watermelon balls into gazpacho. Once I tasted it, I can’t believe everyone doesn’t do this 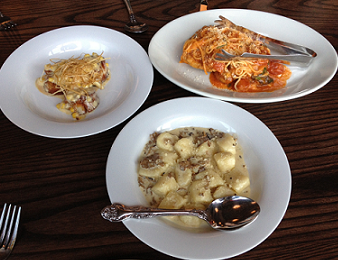 with their gazpacho. Each bite with the sweet burst of cold watermelon was simply divine.

We ordered three small plates, one each, but they promised to share. I knew Jessie was going to get the chicken parmesan because she hadn’t stopped talking about it. Taya chose the scallops and I chose the truffle gnocchi. I must say, they were all winners.

The chicken parmesan is pounded thin so it is light, crispy and full of flavor. It comes with homemade pasta and homemade tomato sauce. In fact, it was so good I couldn’t stop thinking about it for days. The scallops drizzled with corn and a tasty sauce were rich and filling. My truffle gnocchi dish was also rich and full of flavor.

Afterwards we decided to have dessert. There were many good options, but our server mentioned the cheesecake and it was soon on its way to our table. It was covered with fresh whipped cream and berries.

A few days later I returned to Sugo by myself because I couldn’t stop thinking about the Chicken Parmesan and the Gazpacho and I didn’t want to share this time. The server recognized me and told me that they had a new special – blue crab gnocchi. I had a gnocchi dish the last time and decided to stick with my cravings order. Again, both dishes were amazing. Another woman was there alone and ordered the 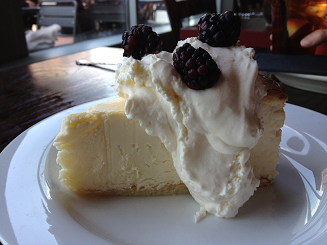 blue crab special. She told me I was missing out and sent me a banana chocolate donut (Thank you!) and it was fantastic.

I’ve heard through the grapevine that their all-you-can-mimosa-brunch is amazing and that their grilled cheese sandwiches are to die for, but I’ll have to let you know once I get a chance to try it out. In the meantime, give Sugo some serious consideration. Sugo Cicchetti is located in the Park Potomac neighborhood at 12505 Park Potomac Ave Potomac, MD 20854.