A Grand Opening in Potomac

The Opening of Lahinch Tavern & Grill in the Cabin John Center in Potomac, Maryland may not have been newsworthy to you. But for the neighbors in the vicinity, having a successful restaurant in the slightly hidden backside of the shopping center has been the cause of anxious anticipation. I 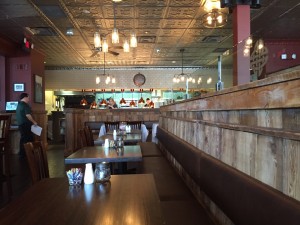 can’t begin to tell you how excited my friends and I were when we heard the news that the owners of the Irish Inn at Glen Echo were going to turn the cool space, but failed restaurant called Benny’s, into something new.

I admit to stalking the location during its renovation process. Friends reported that there were people inside training. My husband reported that the wait staff seemed to be having a tasting or soft opening. A fellow foodie told me it wouldn’t be fair to review the restaurant on the first day. I decided to go a few times before writing this review.

There are two entrances – one through the bar and one directly to the restaurant. A friend and I met there at different doors, but were easily connected by the hostess. We were immediately impressed with the space. Lots of light, impressive bar, friendly wait staff. So different than before and simply beautiful.

We started with soup. Okay, we started with a glass of wine, but we ordered the vegan Andalusian Gazpacho and the Roasted Parsnip, Leek and Hardwood-Roasted Mushroom Chowder. Both were good, not great, but good.

We ordered two sandwiches to share: The Hot Corned Beef Sandwich and the Open-Faced French Onion Steak Sandwich. The corned beef sandwich came with mustard slaw, au jus and fries and would have been plenty for lunch by itself. It was quite good. The french onion steak sandwich was even better. 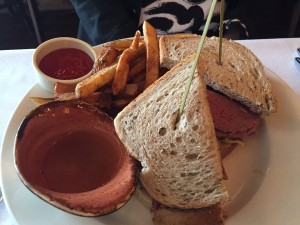 Have you ever ordered french onion soup and made your way through the crock to find there are some onions left in the bottom? This dish is really a piece of garlic bread with steak covered in lots of those onions. Seriously yummy.

The service was good. It was the second day they were open and you could tell there were a few kinks to be worked out over time, but it was a very enjoyable experience. As we began to leave, other patrons were getting up from the bar and greeted us with a look of joy. They told us this is the restaurant they had been hoping would open when Benny’s first debuted. They live near by and can’t wait to become regulars. They introduced themselves and 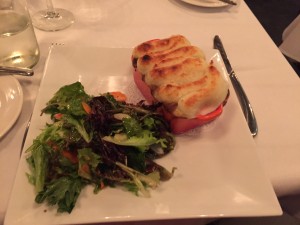 explained how relieved they were with this new opening.

My husband was excited to try Lahinch as well so we decided to go for dinner. I should mention that my husband is British s0 I had a feeling we would be trying far more traditional fare. The server asked us if we’d like to order drinks. I ordered a cocktail and my husband ordered a Black and Tan. The waitress asked, “What’s a Black and Tan?” to which my husband kindly told her the bartender will know how to make it.

All I could think was, “YIKES!” but I worked in an Irish Pub for 10 years. 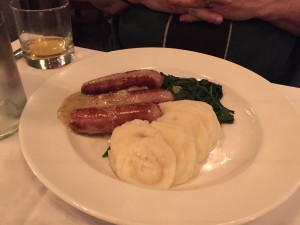 We ordered the Traditional Sausage Roll to share and then my hubby ordered Bangers and Mash and I tried the Shepherd’s Pie. The sausage rolls were good, (but not as good as Grandad’s). Doug seemed to enjoy his Bangers and Mash quite a bit, but the price seemed a bit too dear. The Shepherd’s Pie looked pretty small, but with the salad that came with it, I had a little room for dessert.

We decided to split the Guinness Bread Pudding and each get a dinner drink. Their bar selection is impressive. Our server was attentive and even though there was a band playing in the bar area, the dining area was enjoyable.

As we went to leave, we walked through the bar. The 19th Street Band was playing and there were about two-three dozen people dancing and even more at the bar. I ran into several people I knew and they each raved about what a good time they were having at this newly opened spot.

I visited Lahinch again to see how the restaurant was settling in after the swell of business it received upon first opening. The service has continued to improve and it seems to have a nice following. It is a wonderful addition to the neighborhood. Both the bars seem to attract a steady happy hour crowd. If you’re not craving Irish food every day, their menu offers a wide variety and something for everyone.

Lahinch Tavern and Grill can be found at 7747 Tuckerman Lane in Potomac, Maryland. Check it out and then let me know what you think in the comments below.

If you are looking to buy or sell a home in Potomac, Maryland, give me a call to Get Started.

Interested in reading some other local food reviews by Dana Hollish Hill?  Here are some of her latest food reviews: