I drove by the Cabin John Center yesterday after work to see if China Gourmet Bistro was having its Grand Opening as planned. The new sign was in place and there were six large bouquets of flowers and balloons set-up outside. My family planned to meet there for 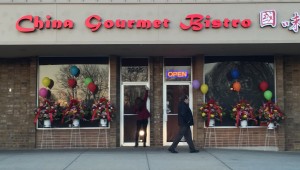 dinner later that evening. This would be the third Chinese Restaurant in this location since we moved to West Bethesda in 2005. The others weren’t open on Mondays so we were already excited.

After my daughter’s basketball scrimmage, I took the girls to China Gourmet Bistro to give the new restaurant a try. We arrived around 8:30 and were greeted by three friendly women. We were seated in a booth and given menus. A fourth person came over to take our drink order and we asked for hot tea. He brought us a small pot and three cups. Another man came over and brought us ice water. Another came and asked us if we 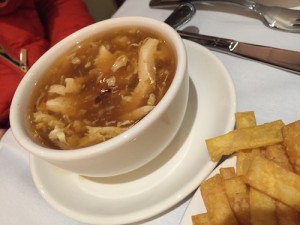 were ready to order.

Their menu has a wide variety of modern asian dishes, including Thai, Korean, Vietnamese and Chinese, but when we try a new neighborhood restaurant we have to try our favorite dishes to see how they compare. My daughters ordered the fried pork dumplings and the hot and sour soup to start and I ordered the lettuce wraps. Then we ordered Moo Shu Pork with the pancakes, Orange Beef (not too spicy) and Szechuan Chicken. We were very hungry.

Each item was delivered at a separate time and by a different waiter. The soup arrived first, followed by the lettuce wraps. My daughter thought the soup was different, but very good. The lettuce wraps were okay. The lettuce was fresh and the chicken was good, but it lacked the flavor I’ve enjoyed with the dishes at other restaurants.  My daughter who wanted dumplings dipped fried noodles in her sister’s hot and sour soup until her

dumplings arrived. When they arrived, she said they were delicious.

At the front of the restaurant there was a small bar with 4 stools and a large television, which was playing cartoons. The volume was on and no matter how hard my daughters tried to ignore it, they kept stealing glances at the TV. There was also music playing quietly throughout the restaurant. As we ate, I watched employees add tablecloths to tables and remove tablecloths from other tables. The three women who greeted us hung out near the front of the restaurant and answered questions for people who came in for a copy of the menu and to take a look. 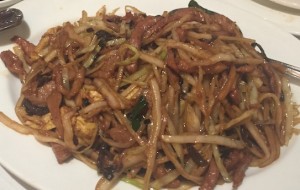 The main dishes arrived at the same time. The Moo Shu Pork was full of flavor and my daughter loved it. The Szechuan Chicken, the dish by which my husband and I rate many Chinese Restaurants, was really good. It had the flavor of plum sauce and a little spice. It could have been spicier for us, but I took some home for him to try and he agreed it was a very good option.

The Orange Beef was coated in a very dark sweet sauce and the pieces were smaller and easier to eat than most Orange Beef we’ve had in the past. It came with steamed broccoli and was the most expensive dish we ordered. My girls usually share this dish, but the serving was really smaller than than the other main dishes.

I ordered some food to go for my husband and when it was time to pay the check three different people came to the table to give the check, collect my payment and bring the receipt to sign. As we walked out they told us that they will be offering delivery in the next few weeks.

Our first experience at China Gourmet Bistro was pretty good. The food was enjoyable and the staff seemed friendly. I hope they can develop a good rapport with the neighborhood over time. I plan to return again soon to try their Ramen, but I’ll probably ask to get a booth away from the TV. If you’d like to give it a try, China Gourmet Bistro is located at 7945 Tuckerman Lane in Potomac, Maryland.

If you are interested in buying a home in Potomac, Maryland, give me a call to Get Started.

Interested in reading some other local food reviews by Dana Hollish Hill?  Here are some of her latest reviews: